Santa was visited by AmiRun and of course there were liters of beer again. Unfortunately Santa is now too drunk to deliver the christmas gifts alone so Amirun has to help him.    Your job is now to steer the sleigh for Santa and tell AmiRun when to throw a gift down to  a chimney.

Control the sled with the cursor keys or with the W,A,SD keys to move right, left, up or down or you use a joypad controller for this.  The carriage is slowly accelerated in the desired direction and then decelerated again after the key is released.

To throw gifts press button 1 for a red gift, button 2 for a green gift, button 3 for a blue gift and button 4 for a yellow gift.   On the XBox controller you only have to press the buttons in the corresponding color.

After the round you can send your highscore, please press enter in the points checkout screen to edit your player name.  The default name AmiRun will not be added to the scorelist, so it is important to change this text with your name. Pressing escape returns to the menu without entering the score.

Your goal is to throw a gift into every chimney in the city.  If you manage to do it, you will get points.  If you throw a gift with the right color into the chimney, you will get extra points and a bonus balloon.  You can collect the balloon and get 2 more gifts to spread around.

If you can throw more than one gift with the matching color into a chimney, you will get a combo bonus and extra points.
Be sure to avoid the bats, if you touch them then you will lose 3 gifts.

The game is over when you run out of presents, so always make sure you collect all the balloons in time.

Check out my other Games AmiRun1 and AmiRun2 and also the DevLab Game or contact me at my Social Media links.

Very cute! Nice execution, good graphics and fitting music. And nobody knew that you were up to something like this. =D
I am feeling a lot of x-mas feelings now.
I like such small themed games for Christmas or for example Helloween a lot.
I scored 12700 points, second try.^^
Edit: 49400 points after reading the instructions....XD
WHY is there no highscore list?

This was a very spontaneous and quick thing. An idea for a simple game, a few pixels and a lot of fun while programming. In addition, Core contributed two music tracks very quickly (1 day) and the game was ready.

Great effort! Well, I played some more rounds, but I didnt reach my score from yesterday again....=D 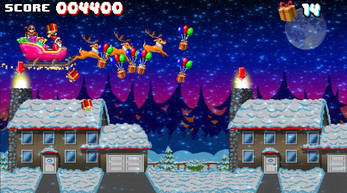 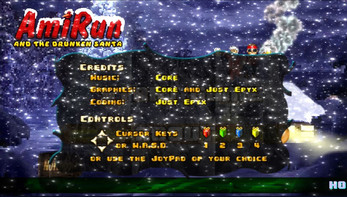 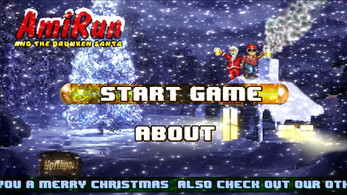